Why Do Good Sellers Lose Deals

Why Do Sellers Lose?

Often times after a painful loss (large transaction/long sales cycle), sellers will be asked to find out why they lost in hopes of getting smarter about things to do or avoid. While that all seems to be logical, it is difficult for the sellers to find out why they are losing.

Informing sellers that they’ve lost in an odd way is analogous to trying to make a clean break from someone you were dating in school. The person who wants to end the relationship tries to leave little room for discussion. One of the more effective techniques in achieving this goal was for the person wanting to end the relationship to say, “I’m not good enough. You deserve better.” or another commonly used excuse, “It’s not you, it’s me.” This leaves virtually nothing to talk about or discuss, is self-deprecating, and places no blame on the person being dumped.

In a similar fashion when a company has evaluated four vendors and chooses the winner, they have to deliver bad news to the other three vendors and want to do it in a way that closes things down quickly. To start, a white lie softens the blow: “We’ve chosen another vendor but wanted you to know it was a difficult decision and unfortunately you came in second.” While usually unaware, it’s as though all eliminated vendors wind up in a three-way tie.

The most common reasons given are:

Beyond that there are times when the feature cited wasn’t the cause of the loss. My view is that many sellers file loss reports and are relieved to be able to pass along features as reasons for losses. Sadly, there are occasions where changes in offerings are made that won’t make much of a difference.

One of my partners says in all of his years in selling, he has never met Column C. Most of the time I believe the primary reason opportunities are lost is that sellers get out-sold. Rest assured, few if any buyers would share that with a salesperson. Most people will choose to avoid uncomfortable conversations.

Buyers may be uncomfortable discussing loss deals directly with their vendors. But they are more than willing to disclose everything that happened in the sales deal to us. Are you interested in that fly-on-the-wall discussion? Our Win Loss Analysis program drives results! See a 10% increase in win rate – guaranteed. Contact us today to get started. 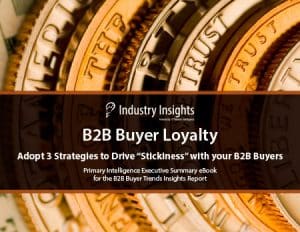 When you lose a deal, will you have a second chance to prospect with that decision maker in the future? Download this free eBook to learn three strategies to driving “stickiness” with your buyers.