I’m a big proponent of discovering the potential value to your prospect of acquiring and utilizing your products and services. One of our core concepts is: People make emotional decisions for logical reasons.

The potential value to a company of changing how they operate can often be the logic they need in order to help them make a purchase or subscription decision.However, I have some concerns about existing “ROI tools” and how they are used by salespeople in the sales process.

Here are a few things to consider about ROI tools and calculators:

Instead, we advocate facilitating the development of a relatively a simple cost/benefit analysis – the price of your products and services and the potential benefits the prospect has told you they believe they will receive over some period of time. Why? 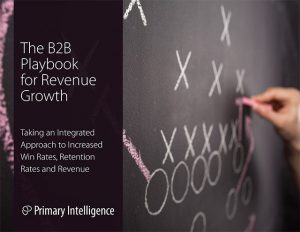 The B2B Playbook for Revenue Growth

Successful companies have realized that attaining sustainable revenue growth means more than getting new clients under their belt. Download the B2B Playbook for Revenue Growth and we’ll show you a two-pronged effort for gaining new logos while retaining existing clients, allowing your company’s revenue to grow over the long term.

7 Problems with Using the Word “Solutions” with Buyers

After the Customer Interview, Turn Feedback into Action