Sales Tip | Handling RFPs You Did Not Wire | Primary Intelligence

Handling RFPs You Did NOT Wire

In the first months of my career I received an RFP from the US Coast Guard Academy. My initial excitement faded as realized it was for equipment totaling about $6,000. Despite the fact that they had several of these devices installed and there was no competition I had to make a detailed response that included posting a security bond. I spent a few hours in my response, won the business and probably netted less than minimum wage for my time and effort. I came to despise the RFP process whether it was for commercial or government entities.

When receiving an unsolicited RFP many sellers get excited. Some even delude themselves into believing their offering is a perfect fit and they have a great chance at winning the business.

Over time sellers begin to realize the only good RFPs are the ones that you get to wire by making the requirements align with your offering and ideally incorporating features or capabilities that are unique to your offerings.

When receiving an unsolicited RFP most sellers feel compelled to respond. After better understanding how most RFPs unfold one of my clients reviewed their responses the previous years, removed the ones they had wired and found they had about a 2% win rate on unsolicited RFPs where they had no influence on establishing the requirements.

We helped devise a strategy to avoid wasting the time of sellers and support people on RFPs they hadn’t wired: 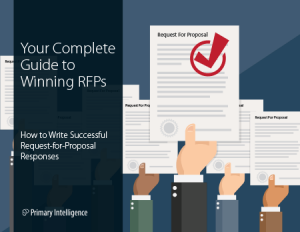 eBook: Your Complete Guide to Winning Requests for Proposal

Writing effective responses to RFPs is always a challenge.  In order to win over the key decision makers, you need to know what makes the winning Requests for Proposal successful. Our experts have invaluable insights on what buyers are looking for due to their closed-door discussions with them. Now we’re sharing those tips with you!

At this point the outcomes were either:

I suggest sending a letter or email to make it clear you were willing to bid if granted access. Before declining to bid the sales manager should make the ultimate decision because there may be strategic reasons for bidding even if the chances of winning are remote.

The client I referenced realized a 24% win rate by usually non-bidding when access was not granted.

While sellers may not like RFPs, if they are successful in wiring bids they actually get the satisfaction of having several competitors spend time effort and resources on low probability opportunities.

For sellers time is precious and wasting time on RFPs is painful to watch. I find it interesting that sellers, despite being reactive, 1 of 5 will invariably assign a 50% probability to RFPs they worked on. If they were more honest and projected a 2-10% win rate their managers would ask:

Why are we bothering with this?

The only good RFP is one that a seller has wired.

Why Traditional Win Loss is Dead