If your company uses market information to make decisions, you are almost certain to be familiar with the ‘Of these items, how important was or which of these would you consider to be first, second, and third most important?’ These questions result in a measurement of stated importance, or those things that are easily identified and verbalized as important.

The Limitations of Stated Importance

While these data are easy to generate and generally seem reasonable at face value, there is evidence to show that decisions based solely on stated importance are subject to important limitations. Those areas of your company’s performance that are identified as most important often do not correlate well, if at all, with purchase decisions. Which means that your company can act on those performance areas identified as most important and yet, no measurable improvement can be made from those efforts. In most companies, that is defined as poor ROI or a waste of money.

For example, through your research, you may identify a performance area with a relatively low performance score and might initially trigger discussion regarding ways to improve the performance. However, you wouldn’t want to do much about it if it had a low correlation to overall increases in market share. For instance, let’s consider this principle in a win/loss setting. Suppose we had created an interview and included the measurement of professionalism of a salesforce against a prospect’s likelihood of choosing a vendor.

Whether the performance rating against the competition was positive or negative, it would be difficult for an executive to understand the impact that professionalism actually has on the company’s sales win ratio. It would be impossible to know how much a change in performance would affect that win ratio. If it turns out that the correlation to the sales win rate is high, the decision to put emphasis on increasing professionalism would be very easy and relatively risk-free. If the correlation were low, resources could be assigned to improve other parts of the sales process.

There is much evidence to indicate that responses on importance scales can be affected by other factors that distort the accuracy of the response, for example. the need to please social demands, cognitive dissonance, and generic importance, among others. In the entertainment industry, for example, television viewers using such scales will continually rate the value of news and information above sex or escapism. However, would anyone wish to predict, based upon these data, whether the ratings of the program The Big Bang Theory will be lower than those of The PBS Newshour?

Thus, there is a much deeper level of insight to be gained from deriving the information from the respondent’s answers rather than taking them at face value.

The quadrant below shows how actual data from our win/loss studies has plotted on stated importance and derived importance: 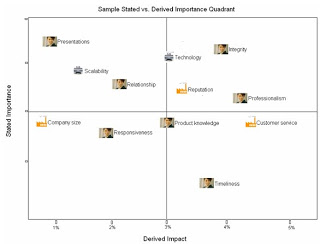 Stated importance is plotted on the Y-axis; it represents the average importance rating given by respondents for each influencer’s characteristic or attribute.

In the end, using the most sophisticated analytics tools to determine the key influencers will eventually provide the greatest strategic decision-making ability for your company. In many cases, this approach has improved company performance much more than gut feeling, reactive competitive intelligence programs, and stated importance measurements. 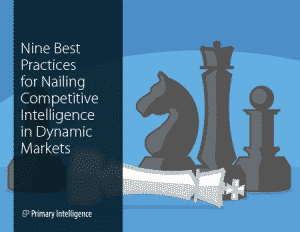 Understanding competitors is challenging, even in the most stable of industries. When trying to nail down competitive dynamics in fluid markets, the task becomes even more difficult. This is especially true if your firm has limited resources for competitive intelligence capture, analysis, reporting, and dissemination… leaving it to sales and marketing to “figure it out.”