No Two Snowflakes are Alike

As a result sales calls are like snowflakes. No two are the same. Sellers are given wide latitude in how to sell, how to position offerings, what opportunities they pursue and the progress they report. In these organizations a high percentage of sales calls are ad-libs.

CRM software was created to track seller activities and improve pipeline visibility. Without question there is value in centralizing and collecting contact information and sales activities.

The problem is that subjective seller opinions about progress on opportunities are the input to CRM systems.

The old IT adage of “garbage in-garbage out” applies because inaccurate opinions compromise the reports generated. How often have you seen sellers inflate otherwise “thin” pipelines?

Years ago I worked with an early CRM provider. Their VP of Sales told me by using their software he was +/- 5% in his revenue forecasts, accuracy most companies can only dream of achieving. They had defined 8 pipeline milestones. From the first day they joined the company new sellers entered data. Over time the system captured and applied each seller’s historical close rates on opportunities in each of the 8 milestones.

I asked him if his salespeople told customers their forecasts would be that accurate once the software was implemented. He said they did. I then discussed with him that his forecasts were based upon heuristic calculations. The software captured how accurate (inaccurate) sellers had been in the past and applied historical close rate to each milestone to create each month’s forecast.

A colleague told me years ago:

Technology without process speeds up the mess.

Forecasts can be generated with a few keystrokes but the reports are likely to be just as inaccurate as spreadsheets that were used years ago when sales managers did their “seat of the pants” forecasts which was mostly paring down over optimistic seller projections. 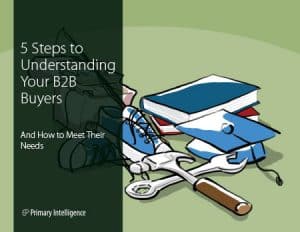 And How to Meet Their Needs

Many underperforming B2B sales teams have something in common: They focus on selling the solution but fail to solve the business problem. Primary Intelligence research found that less than 50 percent of sales teams are effective in understanding their prospects’ needs. The ability to understand buyer needs is vital to any company’s success. These steps are critical to meeting customer expectations and closing deals.

AI for Sales – Needles in Haystacks

Applying Artificial Intelligence (AI) to sales has begun in earnest. There are benefits to be gained, but companies having an overall framework can enjoy the competitive advantage of reaping benefits of applying AI sooner.

The four (4) components needed for sales process are:

Most AI applications require analyses of terabytes of historical data to identify actions that are likely to improve results. It’s the equivalent of finding needles in huge haystacks.

The structure defined above can allow best practices to be identified shortly after AI has been implemented.

Schedule a consultation with a win loss analysis expert to chat about strategies for understanding buyers.

The Compartmentalization of Competitive Intelligence in a Company

What is Sales Intelligence?